Editorial from the April 1, 1971, issue of The Northern Star:

By those who knew him

Roy G. Campbell had been adviser to The Star since 1961.

During those ten years Mr. C was an adviser, he provided his students with high journalistic goals and support in those tear-stained moments when life seemed to be falling apart.

Only those who didn’t know him could get away with calling him Mr. Campbell. To us he was Chief, Dad, Pop, Roy.

He found ministers to marry us; he laughed with us; he swore at us. Most of all he directed us.

Mr. C had been a reporter for the Lincoln Star in Nebraska. When he became an instructor in journalism at Northern, he never accepted the idea that he was just an instructor.

And he always managed to laugh when we would put his back against the wall.

Mr. C’s office in the Journalism Department was constantly crowded with students and always crowded with laughter. He served as academic adviser to most NIU journalism students.

The Chief was in charge of the Journalism Department’s news editorial sequence. Last year that sequence was awarded accreditation by the American Council on Education for Journalism.

A three-member panel of educators who said student enthusiasm had been generated by congenial faculty members. It was Mr. C who established that enthusiasm in the students.

In 1966, Mr. C was named outstanding college newspaper adviser by the National Council of College Publication Advisers. He was chosen from more than 1,100 of his peers.

At The Star we learned to judge our performance by the infrequency of his visits to the office. When things were going well, Mr. C let the editors run the newspaper.

But when things were going badly he was in the office talking, straightening out, settling problems.

He thrived on late-night distress calls, especially when they concerned a Star reporter’s arrest.

When special editions came out at 4 in the morning, he was there.

Mr. C founded a unique spirit in the minds and hearts of The Northern Star staff and hundreds of the other members of the Campbell “family.”

Hopefully, the spirit that Roy G. Campbell implanted in the consciences of the students who came in contact with him will continue to live after him. 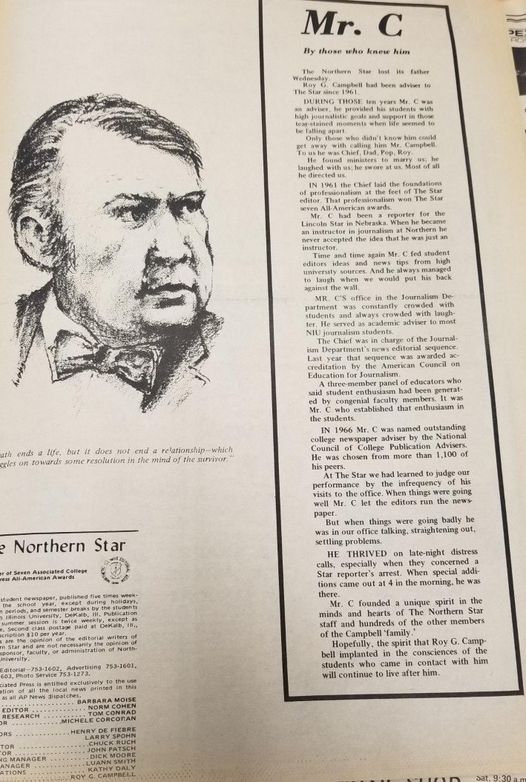 Sad news from Bret Hamilton, the son of Hallie and FloAnn Hamilton. Bret says FloAnn passed yesterday, Jan. 19, on Hallie's birthday. Hallie passed Dec. 19, 2013. (He shared the attached photo.) Two wonderful, intelligent, generous people who were important to so many. Condolences to Bret and his siblings. ... See MoreSee Less

Hallie was instrumental in my career. I can hear him saying her name.

Special people. Hallie was one of the best.

So sorry to hear this. Good memories of both of them.

Sad news. They had me over for dinner once. Forever grateful to Hallie for lending me a shoulder and his ear. Learned so much from him about photography and life. Picturing them riding on a cloud now, getting some great shots!

What a huge influence Hallie had when I attended NIU. Such a treasure.

Such an amazing woman and gentle soul. I loved the times I spent with her. May she rest in peace with her beloved husband.

Zero in the design department.